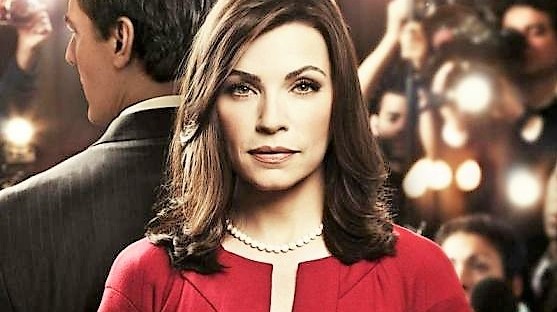 So I am coming off a serious TV watching binge. It was The Good Wife. It’s a TV drama that is,roughly, about a woman whose politician husband got caught with prostitutes and went to jail forcing her, Alicia, to go back to work as a lawyer at a cutthroat law firm. And of course, she is hired at this law firm by a named partner who happens to be  an old law school friend- a boy, a handsome, charming boy that had at one time expressed his love for her. I know this sounds like cheesy crap.  But I fell in love.  I thought I was strong enough to  remain emotionally detached but I wasn’t.

I think it was the clothes that got me in the beginning- all of that tailoring and what-in my mind had to be fabulous material. I wanted to wear those heels all day and not have my feet hurt. I wanted to look as good at 10pm as I did at 8am.  I wanted to engage in the witty take-no-prisoners dialogue, to have the confidence and emotional control that Alicia showed when protecting her kids or dealing with her husband.  I loved watching the scheming and betrayal and not having to actually feel the feelings that come along with real scheming and betrayal.  I couldn’t resist. I fell and I fell hard. It was a total escape from my reality. With each tap of  “Play Next Episode” I put off all of those things on the to-do list.  I didn’t need to think about what to wear and being sick of the clothes in my closet.  I didn’t need to think about making the calls I should have made, reaching out to potential clients that I had in mind.  I just watched and I lost myself in someone else’s life- or in this case someone else’s fake life.

I need to confess to how much it actually took over my life- I may or may not have stayed up past 2 a.m. on a couple of  nights (this is a big deal when you have a bunch of kids to get ready in the morning). I may or may not have let the kids cook Ramen and eat cereal for dinner a couple of nights.  I may have set up the Ipad on my work desk and kitchen island and watched as I half-ass did what I was supposed to be doing.  I may have justified it all by saying that it is ok to lose yourself in -dare I say-ART. That I won’t do it all of the time.

Completely delusional- I see this now with some distance. So what do I do now that it is over?  Simultaneously I feel disappointed in the end of the story and leaving that world, relieved to be released of it’s power over me and feeling guilty about the things I should have been doing while I was under it’s influence.  What is the lesson in this?  I think it’s that I need to be aware of the temptations out there- the diversions from my to-do lists.  But is that really that awful?  Is that what life is – a neverending to-do list?  Is there no room to get lost in a narrative? In a drama that I have nothing to do with?

I understand that it is complete escapism.  Is it healthy? Probably not. Was it enjoyable? 100%.

Do we have to be driven and productive all of the time? I don’t think so. I think we need to allow ourselves time to  forget our nonsense and not take ourselves so seriously.  A pull away from our own drama to get some perspective. And it is ok to acknowledge that I don’t do it all of the time and that my immersion in The Good Wife has spurred a serious period of productivity.  I like to think it is Alicia’s confidence that I am emulating and not the guilt that is motivating me-keeping me on task . And the truth of it is that I don’t want to grind endlessly, to check off the next thing. I like the diversions.  I get my best ideas when the diversions are happening. So either I am really good at justification (I know I am) or I have found a way to work and live. A balance. And that is a good thing,it’s what I want in the end.